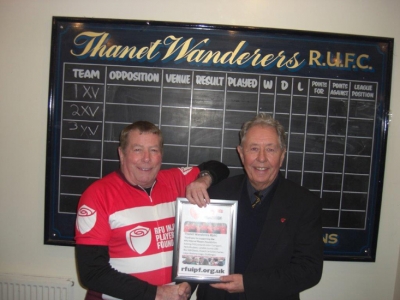 John Corrigan of the RFU Injured Players foundation visited the club on Saturday, 7th January and after an appeal during the President's lunch, he then circulated the crowd, keeping them amused during the game against Folkestone and raised Ł115 from his touchline collection. This makes a total of Ł417 in a couple of visits. He would like to thank all those Wanderers supporters who generously contributed and presented Club President, Peter Dickinson with a certificate of thanks. He also presented the ladies behind the bar with a T shirt to help promote the charity.

The RFU Injured Players Foundation vow to look after seriously injured players for life and help to prevent future injuries through research and education. Full details can be found on the attached Link. The President would like to thank all those who supported the lunch and enjoyed their delicious plate of beef and potato stew, which Kelly informs us contained a whole bottle of red wine! The cost, including a programme was only Ł5. For those of you who like a bargain and missed this real treat, there will be a repeat of one plate of delicious warming food and a programme before the home game against Aylesford on February 18th.