All change at the head of Wanderers Committee for 2016/17 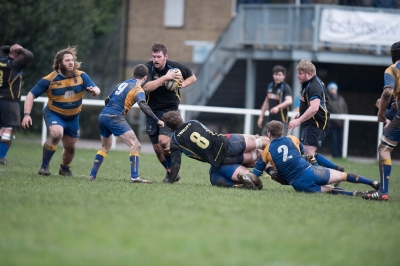 Following the resignation of Chairman Simon Kemp and his deputy Chris Marson, Danny Clement was elected at last night's AGM as chairman with Andy Letts as deputy chairman. The pair (pictured in Toby Gardner's picture), have braved many a tough battle at the front of Wanderers pack and now face a considerable challenge off the pitch to lead an upturn in the club's financial fortunes. There was news too that Roger Bishop had finally hung up his clipboard after 39 years running the club 450 club which has raised crucial funds during those years. He was warmly applauded by the meeting and thanked by Simon who will now take on the important fundraising role. Neil Armstrong has stepped down as director of rugby and it is hoped his replacement will be named shortly. Chris Marson and Jimmy Green have also relinquished their posts in marketing and sponsorship due to the pressures of business. There were no changes in other major roles among the club officers. The outgoing chairman thanked all of them for their support during a difficult year for himself. He was warmly thanked and applauded for all that had been achieved during his four years in office. David Lemon will continue as first XV captain with Sam Rolfe leading the 2nd XV. Head Coach Tom Carlier announced that Senior pre-season training will commence on 7th July.