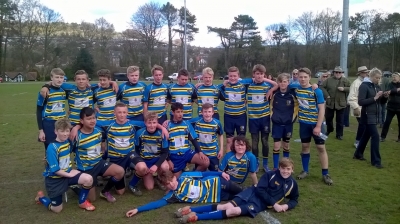 THANET WANDERERS U14S Thanet Wanderers U14s brought the season to a successful end by completing the double and winning the East Kent Final, to go with the Kent title they won several weeks previously. They faced Folkestone at Dover and ran out 20-5 winners despite some very strong opposition. Thanet opened the scoring with Sonny Teall scoring the first try. A couple of opportunities were missed and then Folkestone equalized. As the first half came to a close, Joe Skendrovic bundled over to give Thanet a 10-5 lead at half time. The second half was tough, with handling errors on both sides, but Thanet scored again through Joe Skendrovic and finally Harry Clemo completed a forwards move and forced his way across the line to bring the final score to 20-5. This result added to an excellent season for the Wanderers' junior teams as the U13s won the East Kent Plate and the U15s won the East Kent Cup. All the boys and coaches should be commended for all the hard work that led to these successes. Squad: Clemo, White, Phagami, Regulous, Sullivan, Lycett, Jones, Teall, Pryce, Whelan, Morley, Brown, Daly, Corbin, Liddle, Collins, Chance, Leahy, Skendrovic and O'Connor