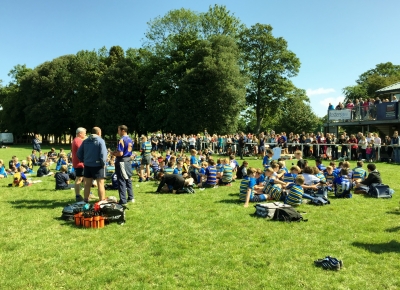 THANET WANDERERS RUFC COMMUNITY OPEN DAY 2015 The Community Open Day is fast becoming a firm favourite in the club's calendar. The 2015 event was held on Sunday 6th September and the main sponsor for the day was again London Array. The Open Day gives an opportunity to potential players of all ages to come along to the club and give the game a try and sample what the Club's friendly and welcoming atmosphere on and off the pitch. With the Rugby World Cup almost here the RFU hopes the interest it will generate will attract new players to try out the game. Over 200 youngsters were present to hear Club Vice Chairman Chris Marson welcome everyone and then proceed to recount the many achievements of the mini, midi and junior teams during the previous season. Each team was invited up in turn to receive their prizes kindly donated by the sponsors London Array. Well-deserved applause greeted each group but perhaps the loudest was for the team of dedicated coaches who give unsparingly of their time to train and safeguard the youngsters. After the presentations there were master classes conducted by Peter Macaulay, Daryl Vas and Chris Marson these were attended by over 75 children both current and many new players. There was also a touch rugby tournament to encourage adults to take up the game thanks to Thanet Council Sports Development Officer Colin Rouse for coming along and making the day even more fun.