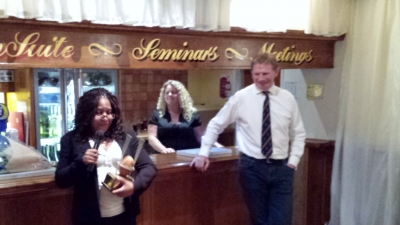 Club Supper The Club Supper was held on 1st May at Club Sponsors Thorley Tavern's Pegwell Bay Hotel. After an excellent meal, Vice President Chris Marson called up the Captains of the senior teams to comment on their year and announce their players of the season who received their awards from Club Chairman Simon Kemp. Captain of the 4th XV Neil Roby commented on the difficulties of raising a league side although many of the 4ths were in the well supported Vets side that lost a close final in the Late Red Veterans trophy. The 4th team player of the year was PAUL DICKINSON who also played in the Vets final. 3rds Captain Andy Bourton was satisfied with a season that saw his side finish only 6 points behind the league winners in 4th place. The turnout for training had been good and Plank was thanked for his help during the sessions. The 3rds player of the year was prolific try scorer NICK FEATHERSTONE. For the 2nd XV Captain Kris Finneran pointed out that around 18 of last year's U18s and U17s has played in Wanderers senior ranks this season and hoped this development would continue in future years. The 2s player of the year was JOE WILSON whose consistent form in the back row had earned regular call ups to the 1st team at the end of the season. Coach Mike Pond was thanked for his organisational skills on and off the pitch and presented with some of his favourite beverage as a token of thanks. Dave Lemon, the 1st team Captain, reviewed their season which had opened with much promise but ended disappointingly with only 35% of league fixtures won. A final place in the Kent Plate was achieved after only one competitive game but the final was lost against Charlton Park. Back row Brett Scott was the only 'ever present' this season and top try scorer was Taylor Lawrence with Tom Ash scoring just one fewer. Ryan Copp brought reliability to place kicking and was top points scorer. Team Manager Michelle Mclean and Club Physiotherapist Monique Wood were thanked for th