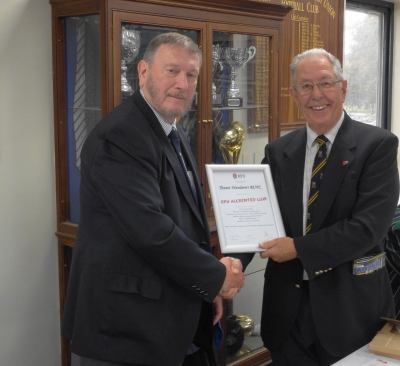 Prior to the match against Folkestone on 7th October Thanet Wanderers held a well attended lunch, when club members were joined by representatives of the club sponsors, together with honoured guests Colin Blackham, the President of the Kent RFU and John Corrigan, who is a fundraiser for the RFU Injured Players Foundation. Peter Ruranski, who is the Club's Director of Marketing, works hard to maintain contact with our existing sponsors and obtain new ones. He organised the lunch and welcomed and thanked the sponsors whose support is vital to the club. The President of Thanet Wanderers Peter Dickinson, together with the club's Junior Chairman Annemarie Carfoot and the Club's coaching co-ordinator and Girls Rugby Coach Maggie Watts have worked tirelessly to complete the RFUs self-evaluation of the Club's activities in terms of the training and safety of players, coaches, match officials and volunteers; the playing and social environment within the club and its links to the community; and club management, finance, governance, policies and procedures. The outcome was that six key objectives were established to move the club forward. The RFU set exacting standards but the club were recently re-awarded the meritorious RFU Club Accreditation Certificate. The RFU's Regional Development Officer, Gareth Jackson, helped considerably with the application. With his help a grant has been secured to further the development of touch rugby at the club and there is the possibility of another towards the installation of a lift at the club. Mr Blackham, who retires as President of Kent RFU this year, presented the award to Peter Dickinson and spoke warmly of the help the Thanet club had given him when he was helping set up his own New Ash Green Club. John Corrigan thanked the members for the generous donation on his last visit a year ago and also spoke of the work of the foundation in supporting seriously injured players and his part in raising funds through s