Thanet Wanderers And The Flying Pig 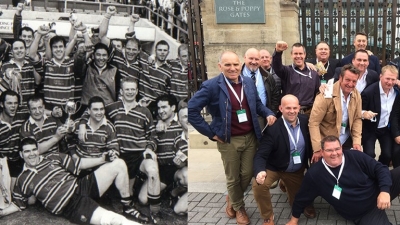 "I'm a bit like Jonah Lomu, but more Sumo than Lomu." That's how Thanet Wanderers Veterans captain Elliot Stokes explains how he earned his nickname, the 'Flying Pig'. The 50-year-old winger has been playing at Kent-based side Thanet Wanderers for 35 years, and is now captain of the Vets side. "When I joined I was built like a stick but then I was introduced to beer and I got bigger and bigger, so now I look like a prop on the wing," says Stokes. "When we turn up to a game you can see the opposition winger thinking 'I've got an easy game here', but even when I put the weight on I could run the 100 metres in under 12 seconds. "My teammates said I resembled a flying pig and the name has stuck ever since." Appearances can be deceptive and Stokes certainly proves that rule, he still holds the club's record of most tries scored. Reunions and tight shirts Since joining as a 15-year-old, Stokes has played for every senior team at Thanet including for the 1st XV for 20 years, and he isn't alone. Of the current Vets side, eight of Stokes' teammates were there when he first joined. "We've grown up together and played alongside each other all our lives. That's why we love the game, it brings us together," says Stokes. But there have been some hiccups along the way. At a recent Vets away fixture, Stokes accidentally picked up the wrong kit bag, mistaking the U15s bags for the Vets'. "There was nothing else we could do but wear them which for our forwards meant their beer bellies were hanging out, I spent the whole game laughing." For Stokes, it is days like that which epitomise Vets rugby. "It means we can keep playing the game we love but with more of a focus on the fun and social side of the sport." "The two clubs have gone on slightly different paths since then," says Stokes, who attended a