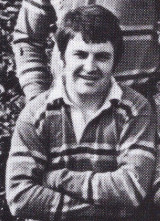 We are sad to announce the sudden death of Mick Browne last Friday 30th June 2017.Mick was a stalwart of the 1st XV from the late sixties through the seventies after he arrived from Yorkshire to teach at Clarendon House Grammar School. Details of a celebration in his memory will be announced as soon as they are available. Further details from Geoff Redmond on 01843 595810 or 07969 800493 or geoffredmond@uwclub.net