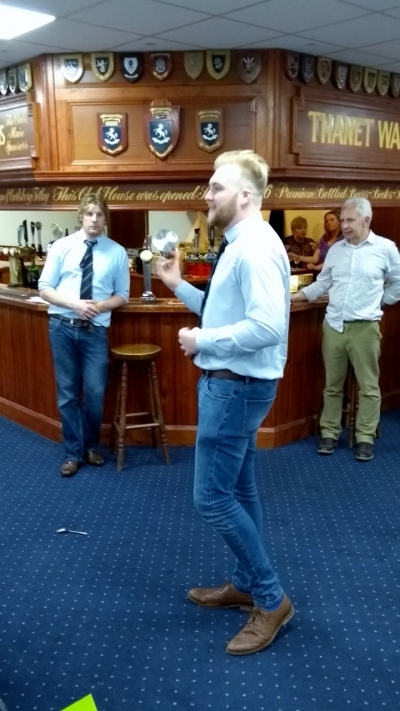 Vice Chairman Andy Letts chaired proceedings due to the unavoidable absence of Danny Clement. The Kent Veterans Cup was proudly displayed by team captain Elliott Stokes who then presented the award for the third team and veteran player of the year, Paul Moat. Paul was a late convert to the game who despite his obvious talents is happy to play in the third tier. The second team player award was presented by retiring coach Mike Pond and went to Chris Hood. Chris only took up rugby two years ago and by dint of hard work and diligent training has become an essential cog in the two's machine. Outside-Half Zac Ward was, at eighteen, the first XV top points scorer and won the young player of the year award. In presenting it Dave Lemon mentioned the many U18s who had contributed so much to the senior sides this season especially Charlie Knight whose scored 26 tries for the first XV. The first XV player of the year was lock forward Brad Turner. Dave Lemon presented the well deserved award to the Christ Church University student who was Mr Consistency in the first XV engine room. Clubman of the year was another dedicated young Wanderer, Nathan Stout. He has come through the junior ranks, played senior rugby since his seventeenth birthday and prior to that was the first XV touch judge. Thanks to Kelly, Gerry and Ross for a fine supper to celebrate another successful year for the club. Picture is of 1st XV player of the year Brad Turner