The Vets are the Spitfire Gold Cup winners for 2016.17 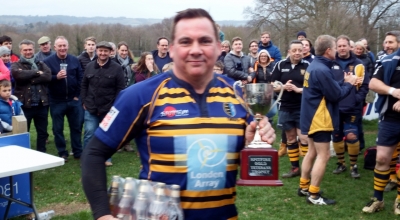 At Maidstone RFC yesterday the Vets won a nail biting final against Sevenoaks RFC. Vets. The lead swung from one way to another until Oaks levelled the scores at 31 all with a penalty try in the last play of the match. Wanderers won by virtue of scoring five tries to their opponents four. Thanet's try scorers were Pete Oliver and two each for Dave Lemon and 'try machine' Paul Moat. There are some superb albums of the game on the club Facebook page. This picture shows team captain Elliott Stokes with the Cup and some of the sponsors' beers