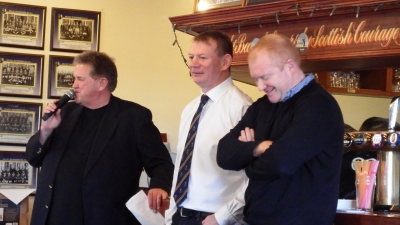 OVER £5,000 RAISED ON THE DAY BY THANET WANDERERS SUPPORTERS Paul Keohane's untimely death prompted the 2016 celebration of his life and fund raising lunch. The occasion was such a success that the organisers, brother John Keohane and friends Chris Marson, Gary Frame and Jimmy Greene decided that the event should become an annual one. This year's function took place recently at the Wanderers Clubhouse with superb catering by Paddy Mcevely ably assisted by Andy May. Table service was by Thanet juniors overseen by Kelly Smith and bar service during a long day was by the regular team overseen by Gerry Doyle. Speeches by the organisers included the news that funds raised would be used to help restart the school liaison intiative to introduce young people to rugby particularly at schools where the game is not regularly played. Support will be given to the 'Beach within Reach' charity which provides all terrain wheelchairs so that Thanet's beaches and countryside are within the reach of all.  Over the two years 250 people have attended the events and a total of £16000 has now been raised, with a portion of funds being used by the local hospice to build a family room. Chris Marson ably conducted the auction of photographs of famous sportsmen. A consortium of ex Chatham House and Clarendon pupils clubbed together to purchase one which was then presented to Andy Williamson who was a respected master at the school. He was the school's first XV coach and also for many years was first team coach at Thanet Wanderers. A date is yet to be confirmed but there will be another lunch in 2018.