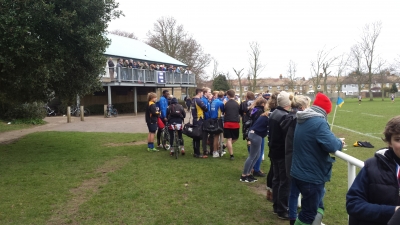 The veterans took centre stage on Saturday with a semi-final victory by 35-32 in the Spitfire Gold Veterans Cup against Tunbridge Wells. At the same stage last year the Vets lost against the same opponents by one point in a 39-38 thriller but turned the tables this year thanks to a fine all round team performance. A long range penalty from Gareth Redmond was the difference between the two sides and Paul Moat,who took up the game at the veteran stage recorded a notable hat trick of tries. The Vets will meet Sevenoaks in the final at Maidstone on 19th March .(A short report on this match is on the team web page) On Sunday The U15's wore down a tough Old Colfeians side in a Kent Cup Quarter Final before running away to a 45-10 win in front of a good supportive crowd (Picture) They will now be away to Beccahamians in the Semi Final next Sunday. More good news from the U13's who won both games without conceding a try to progress to the next stage of the Kent competition. The U14's faced tough opposition before remaining unbeaten in their three Kent Cup preliminary round matches and progress to the semi-finals at Canterbury next Sunday. Good Luck to them all. .