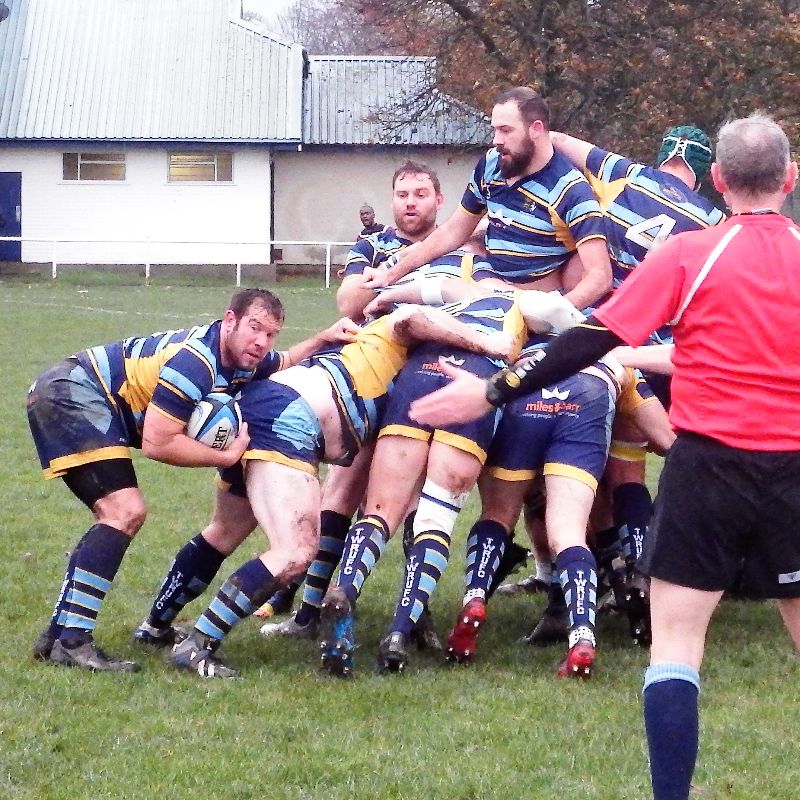 Wanderers battle with the elements and determined opponents to record a bonus-point win.

Thanet and Beccehamian have very similar playing records but the clubs now swap places in London League (2) South as a result of today’s result with Wanderers moving up to eighth.

Thanet welcomed back Nick Herbert at ten and Marius Thompson at full-back and up front, hooker Neil Wakefield and tight-head Alex Tuddenham were restored to the pack with Kris Finneran slotting in to the second row in place of Andy Letts who was injured in last week’s Veterans match. New dad Danny Clement was back on the bench after injury and combined parenting duties for their baby son with partner Physio Monique Boorman during the afternoon.

Wanderers played down the slope with an increasingly strong gusty wind favouring them in the first half. An early penalty was conceded at a breakdown but Thanet were playing with pace and energy and gained a penalty from a strong scrum. Outside-Half Nick Herbert looked in the mood for a game after missing two matches due to work commitments. His teasing long kick bounced awkwardly for a visiting defender and the chasing Cameron Beck nipped in to touch down his first try for the premier XV. Marius Thompson added the extras for an early 7-0 lead. Only seven minutes had been played when Wanderers added a second try through skipper Sam Taylor, following some good work from Harry Carter in the confident build-up to the try. Scrum-Half Callum Doody’s kick used the wind well to test the visitors’ defence before a Thanet high tackle brought a penalty and the position was lost. Marius Thompson moved smartly to make a mark before sending his kick many metres into the Beccehamian half. A poor clearance attempt by a visiting defender was picked up by Thanet and the conditions were defied as the ball hurried along the line to Thompson who sped along the wing to touch down wide left for a try that he was unable to convert into the wind. Beccehamian were increasingly competitive and some good handling, principally among their forwards, brought them a well-earned try wide right. That conversion also failed but the visitors were on the board at 17-5. On 25 minutes Wanderers scored the try of the match. A long penalty had brought a line-out around 18 metres from the visitors’ line. Jimmy Green caught Wakefield’s well-judged throw but was hauled down as he neared the line. Charlie Knight took over but was also halted before Harry Carter raced in for his maiden try for the first XV which also brought the try bonus point. Wanderers were on top until the closing minutes of the half when Beccehamian mounted a strong attack and Thanet’s No 8 James Hamilton was shown yellow before the first half closed with Thanet leading 24-5.

Conditions were deteriorating rapidly with a bitterly cold afternoon exacerbated by heavy rain and very strong winds which now favoured Beccehamian as the second half got underway. The visitors had long spells camped on Wanderers line but great defence, with Warren Riddell-Bloomfield as always prominent repulsed all but two of Beccehamians’s onslaughts to run out 24-15 winners.

The bench of Danny Clement, David Lemon and Harrison Leach made important contributions and many of the players had played to near exhaustion in a match that defied the elements to contain moments of great skill and determination Players had become almost indistinguishable in the cloying mud by the time referee Simon Bingham sounded full time but there was no disguising Wanderers delight at claiming their first home win of the season and five precious points.

The choice of man of the match was a tricky one with all 18 in the squad putting in valuable performances. Alex Tuddenham and Jack Startin are newcomers to the pack this season and have rapidly become automatic starters. Louis Marshall on the left wing had another top game but Thanet’s man of the match was Cameron Beck who was at inside centre today. His play, particularly during the first 25 minutes, was inspirational and helped put Wanderers in a winning situation.

Next Saturday, 4th December, the team travel to Crowborough who upset the form book by defeating previous league leaders Old Alleynians on Saturday. Kick-off will be at 2 PM.