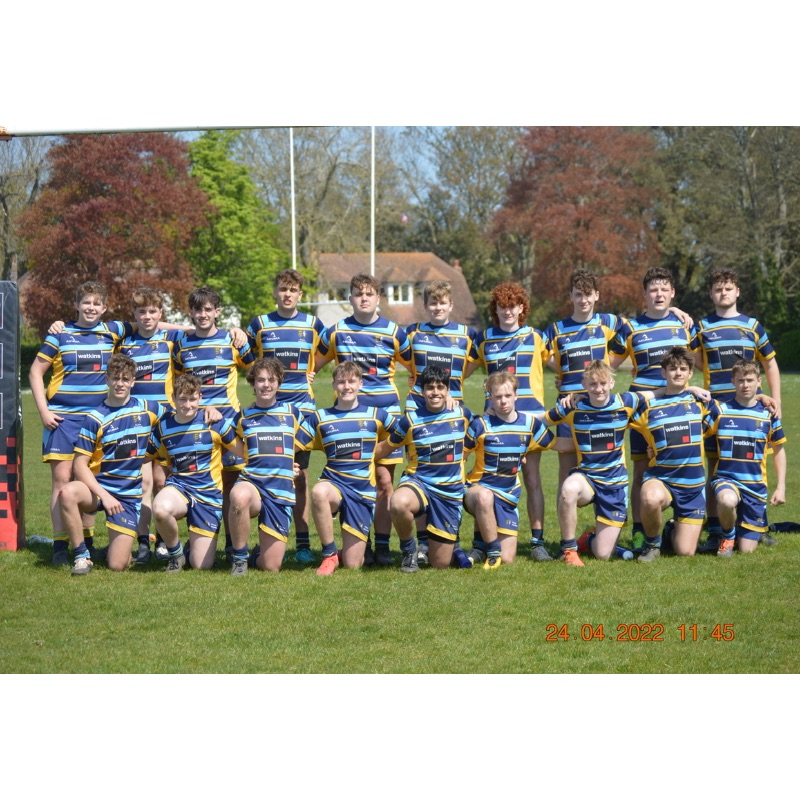 The last round of the Kent cup, and our Thanet Wanderers Under 16s Gold were to finish the season up for the Under 16s at home. Our Under 16 Blue side were awarded the points against Dartfordians, who they were due to play but they pulled out of the fixture. With these points the Blue side won their league and finished the season unbeaten.

Thanet again had some absentees and injuries but still managed to have a squad With 19 players. The weather was sunny and clear but was quite chilly and the wind was to play it’s part in the game today.

Captain Finn HICKMOTT gave his team talk to the squad.  Thanet were determined to finish this season off with a positive result and all looked determined. The pre kick off huddle and  shout of ‘Thanet’ was heard all around St Peter’s park.

The game kicked off and Thanet straight away found themselves on the Sevenoaks five meter line, trying to win a line out. The ball went back to an Oaks player, who kicked but the strong wind took the ball back in the air into the try area. Both HICKMOTT and Hugo Evans rose highest and bought the ball down. Both claimed it, but the consensus from those closest was that HICKMOTT touched it down to get the score. Charlie Panteli took the extra two points expertly slotting over the conversion.

We had a new front row of Ben Couldridge, Reece Davies and Jack Brewer but they performed very well with all of them playing there at different times this season. Plenty of play went though Zach Ralph who was moving it quickly and dictating play around the pitch. Our second row had Joseph Near putting in some massive tackles and Alfie Reeves some great forward runs.

In the eighth minute Thanet broke free with Isaac Divine making a powerful run and choosing just the right time to pass wide to Stanley Ball, who turned on the afterburners and ran in from distance to score and put Thanet 12-0 up.

I’m the 22nd minute Thanet were pushing hard and having had several attacks Divine drove hard and passed wide to Harvey Stocker who perfectly passed on to winger Ewan Maclean who had lots to do but went passed 3 or 4 on coming backs to run in under the posts and give Panteli an easy conversion.

Fred O’Halloran playing at 6 today was having a great game making tackles and getting to the ruck and Hugo Evans in at 8 helped make the scrum dominate as ever and had some big carries. The centre partnership of Divine and Ollie Burch worked tirelessly throughout in attack and defence.

As the half time whistle sounded the score was 19-0 to Thanet. We were aware the wind was playing it’s part. Further changes were made so all players got their chance to close out the season with playing time.

Into the second half Thanet knew they would be up against a Sevenoaks side that would come back stronger but also the dreaded strong wind.

Dominick Springer came on and showed again good improvement with his powerful runs and defensive work. Lewis Vandervord was out on the wing for this half but with the wind was having to have employ his excellent defensive skills more than the offensive ones. Sevenoaks in the 22nd minute utilised the wind and pressed hard and after a strong run which was back up, they crashed over and it was converted. To leave the score Thanet 19- Sevenoaks 7.

Two players that had come on and had to show their tackling ability were Shaheer Khan and Alex Baker, both demonstrating good technical ability and work rate.For the final minutes of the game, Thanet did not cope well with the wind and after some great passing to the left, Sevenoaks went over in the corner. Thanet did spark back into life and on the final line out HICKMOTT stole the ball and left it to Panteli to kick it out as we were in overtime.

The final score today was Thanet Wanderers Gold  19- Sevenoaks Gold  12. A really good game of rugby from both sides played in the spirit of the game.

Today the whole squad played very well and  there was a number of strong candidates for the ‘Please Sir’ Man of the match but it went to Zach Ralph. Zach not only played well but also listened exactly to what the coaches asked and he carried it out, Well done Zach.

That completes the Kent cup and all fixtures for the season. A successful season with both teams playing some excellent rugby and only having one defeat for the Gold team from both leagues.