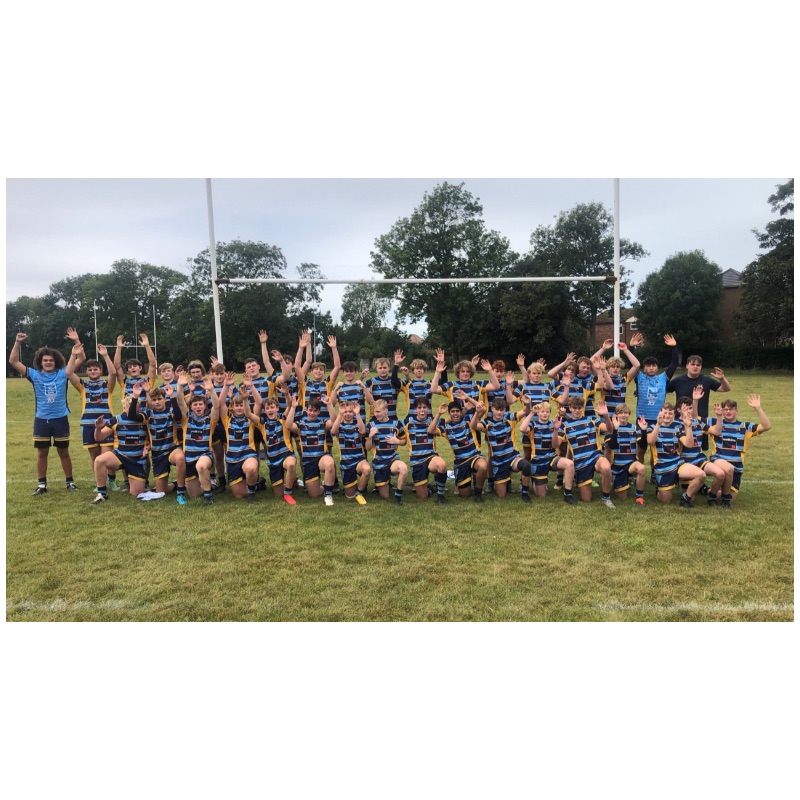 This Sunday the Under 16s had no opposition and so it was decided that with the size of squad we were to play a game between themselves.

The previous days bad weather had passed and left the ground a little softer. With a number of lads sporting injuries we were still in the luxurious position to field two sides of 18.

The game kicked off and was immediately into a battle in the middle of the pitch. Hugo Evans, Archie Kujawinski, Shaheer Khan and Tyler Day all involved early on. With the game only a couple of minutes in, Josh McCulley, Reece Davies and Vinnie Perkins made important touches and after a powerful move by the ‘blue’ team, Jack Brewer was left to power over and score with Toby Hunt drop kicking the extra points to give them a 7-0 lead.

The front row of the ‘white ‘ team including Dominick Springer, Fred O’Halloran and Ben Couldridge were doing a great job in the scrum and were  equally matched up with their opposition. Some of the lads in the scum including Reece Davies, Alfie Reeves, Archie Kujawinski, Josh McCulley, Mason Waters, Tyler Day, Harry Burley and Joseph Near are all new to the front row but showed real promise.

A few minutes after the first try, it was the white teams turn. From the middle of the pitch, the ball found itself to Tom O’Callaghan and he pushed forward, fixed the on coming opposition and passed wide out left to Linus Honey. Honey expertly took the ball and from some distance out showed some great wing work to avoid the on coming tackles to run the try in.

Part way through the half Ollie Burch made a great run down the right wing and came close to scoring only for a tight defence to hold up. Burch slightly tweaked his knee and came off with Finn Hickmott replacing him. Owen Read was back at full back and showing a really cool head and brave heart with each play he was involved in.

About midway through the half the ‘blue’ team had some great possession with Zach Ralph and Theo Rowe making some good passing and kicking choices. Next Lewis Vandervord picked up the ball on the half way line and pushed hard forward avoiding tackles and retaining possession well, showing his confidence is growing as well as his play.

A good ball out wide, finding Oscar Andrews and he showed Usain Bolt like pace to run down the right wing and touched the ball down like a pro, Hunt kicking over again, bringing the scores to 14-5 in favour of the ‘blue’ team.

Before halftime, the white team grew into the game. Brandon Davies making a great run down the wing, only to be stopped by a combination of Marshall Pusey and Evans. Will Durrant was showing some nice touches, starting off some good moves. Sam Stevenson, as he has all season looked sharp and was first to everything.

Half time came with it 14-5 and well balanced. Further lads were bought on with team Captain Max Anderson, Gil Smith, Isaac Divine, Charlie Panteli and Harvey Stocker taking the field.

The ‘White’ team came out looking ready for business. Alex Baker making an excellent tackle, this was followed up by multiple tackles made by Divine. The ‘white’ team made their presence felt with Anderson pushing hard forward and Smith taking the ball on and he was not to be stopped, back to 14-12.

A couple of minutes later, good work from Vandervord, Divine and the ball found itself to Reeves. He had lots around him but some great strength and once free a turn of speed saw him score his first on his debut.

We then had a flurry of tries, first after good progression from Brewer, who passed onto Hickmott and he crashed over for his first of the season. This was closely followed up by brilliant work from the ‘blue’ team, nice passing from Ewan McClean and Kugawanski and the rest was down to Hunts powerful display to make it over the line. The score was balanced at 24-19 to the ‘blues’.

The blue team pressed hard and after a kick toward the ball was initially taken by a the opposition, McClean was hungry for his try and got to the ball and went over to score with Hunt converting. Just as it looked like the ‘Blue’ team were pulling away, good work from Panteli and the ball made it to Andrews, who had swapped sides for the second half and he went over and it looked like the come back was on.

The ‘blue ‘ team were having none of it and great work from Rowe and then Stevenson was chasing the ball towards the try zone, it looked like he had no right to get there but just managed to do so and grounded the ball.

The ‘white’ team had the last word with a brilliant team play, ending with Evans going over.

Although the final score was 36-32, the real winner today was the squad as a whole, as they all got to play lots, the newer lads got well needed exposure, they represented well and was a really good well balanced game to watch.

It was great to see Stan Ball and Alfie Peace on the side lines giving encouragement out to the boys, even though both are injured at present.