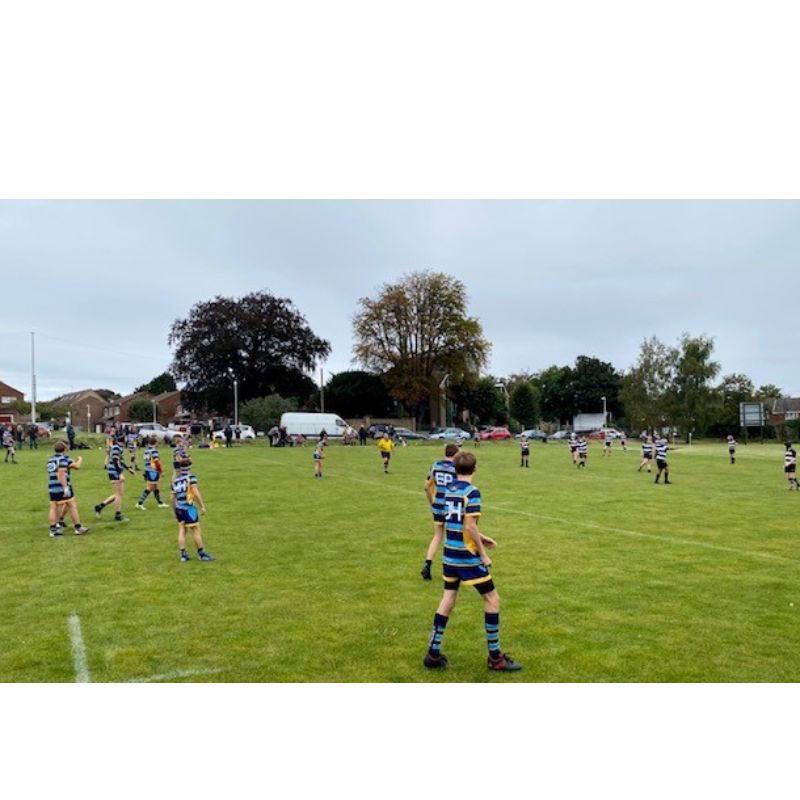 It was an away trip to Gravesend this weekend for the boys, with the petrol 'crisis' leading to a ‘carshareathon’. As the first team narrowly lost to Gravesend the day before, we wanted to come away with a result to redress some of the balance and salvage some Thanet pride. The Gravesend pitches are something of a geographical curiosity, with the second team pitch  in particular resembling a skate park half-pipe. We wandered over to the third team pitch, which topographically is angled on a side slope with what appears to be a 30° gradient into the bottom corner. There were no prizes for guessing where the majority of the game was likely to be played.

The game was to be played in 20 minute thirds. We kicked off immediately into the aforementioned corner and ‘set up shop’. The Gravesend defence was, however, solid and their line speed was dubiously fast with perhaps a hint of offside especially from the lineout. Wave after wave of Thanet attack from both the forwards and the backs, always close to the line, but not across as the team were continuously thwarted by either Gravesend turning over the ball or silly knock ons. Gravesend couldn’t get out of their half, but frustratingly for Thanet, for all our pressure, we finished the first third without a score - 0-0.

The second third commenced with the same pattern being established, Thanet camped down in that Gravesend bottom corner but seemingly unable to cross the line. Eventually the deadlock was broken by quick ball being spun out the back of the pack by Finley Stroud through the backs to Tom Gough punching through the Gravesend backline to hand over to Dan Jury who shimmied to the line - 5-0 which Jack Vas duly converted - 7-0.

The restart saw Gravesend briefly enter the Thanet half but a clean take from the forwards led to a drive and a kick back down into the Gravesend corner. Frustratingly again, we couldn’t quite seem to get the ball over the line, but the referee was now beginning to pick up on the offside around the ruck for Gravesend. Another penalty then led to Jack Vas adding an extra three points to the Thanet score – 10-0.

Gravesend now started to get a little bit of ball however tenacious Thanet tackling meant they didn’t get the ball further than their centres. More exasperation for Thanet, as we over picked from the base of the scrum when perhaps the ball should have been more quickly distributed to the backs, because on the third pick up we were turned over when we had a clear overlap.

Gravesend cleared their lines but again, they were unable to push through into the Thanet half and their subsequent knock-on led to our scrum.  Thanet had already begun to show real dominance at scrum time and a clean hook and subsequent snappy crisp hands through the backs opened a gap for Zac Oliver-Hendy to burst through to score Thanet’s second try.

Gravesend kicked off but their short foray into Thanet’s half this time lasted less than two seconds as Tristan Surry ran the ball back up into the Gravesend half.

We entered the final third with Thanet playing up the pitch and I think the Gravesend coaches felt this would be their opportunity to exert pressure into that notorious bottom corner and score some tries of their own. Unfortunately for them, Thanet were in no mood to let in any points (this was ‘No Time To Die’). Not relying on the boot as much, Thanet were moving the ball more crisply and running up the pitch rather than kicking down it. The power runs through Charlie Bailey and Callum Duffy saw Thanet remaining deep in the Gravesend half. Gravesend conceding more penalties now and a quick tap and pass to Archie Hussey who bulldozed through half the Gravesend pack to score.

Final score 23-0, and a job well done against decent opposition.