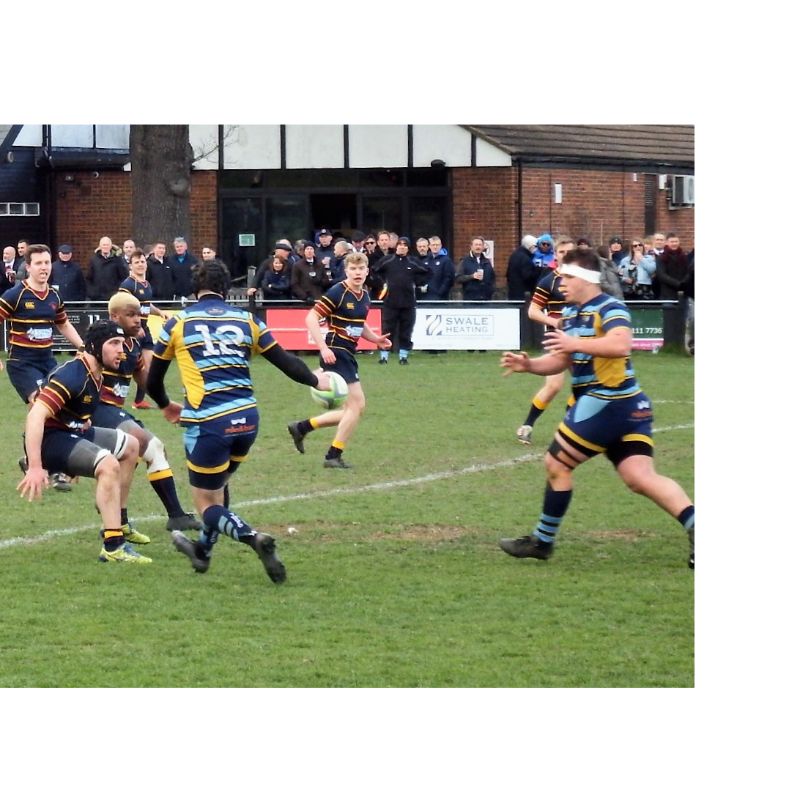 Colfes are League Champions after a comprehensive nine try defeat of Wanderers.

For Wanderers, Mike Morris stepped up from the 2s to make a very promising debut at tighthead and Louis Marshall switched to wing forward rather than his usual wing three-quarter position. Skipper, Sam Taylor, reclaimed the seven shirt after a week away. Nick Herbert, Charlie Knight and John Oxley returned to the backs where Harrison Leach moved to the wing from scrum-half.

Celebrations were on hold for Colfes who just needed a point to confirm their success as League Champions. However, over a hundred former players had attended their annual lunch at the club. The Prosecco bar was in full swing for ladies' day in a marquee, and talk of promotion was in the air.

The home side dominated the opening eight minutes and then ran in their first try which was converted. Wanderers' attack from the restart was halted by a penalty against them for not releasing. Marshall was enjoying his back row role and his sharp break was continued by Tom Walton and it needed a good tackle to stop him from reaching the line. Back came Colfes and good handling created an overlap wide right that brought a second try and 14-0. A nose bleed for Marius Thompson meant the fly-half had to leave the field, he was replaced by Cameron Beck. Colfes' live-wire hooker ran in his second try for 21-0. Thanet continued to probe but could find no way through although Walton again went close. Hooker Danny Clement now sustained a hand injury that eventually caused him to have to withdraw. He with his fellow Vets, Andy Letts and David Lemon, in the second row, put in fine performances today against strong opposition. The bonus point try that the Colfes’ crowd had been waiting for came before halftime when the score was 28-0.

Outside centre Charlie Knight could not continue after half time and back row replacement Warren Riddell-Bloomfield replaced him in a reshuffled backline. The hosts now joined in the party mood and played some attractive rugby to run in four tries, three of which were converted to lead, 54-0.

Thompson was now able to return with the bleeding stopped and Clement came off with Riddell-Bloomfield moving to hooker. Jack Startin made a welcome return after a lengthy injury absence and John Oxley had to leave early due to work commitments. Wanderers never gave up trying and 34 minutes into the half it was Thompson who cut a lovely line before handing on to Walton to touch down. Thompson converted to give Thanet seven points. Wanderers were still desperately defending but could do nothing to prevent a final try that made the score 59-7.

This was a disappointing end to the season for Wanderers after what has been an overall successful season with the objective of a top-six position reached. There was much to admire about the Colfes’ performance and they are worthy league champions. Good luck for next season.

In the pack Harry Clemo and James Hamilton endorsed their defensive credentials and Nick Herbert strove hard to make the best of the limited ball he received. Wingers Harrison Leach and Fran Gillespie saw little of the ball but will have learned a lot about the demands of this league.

As he has throughout the season, Sam Taylor led his side from the front and tackled himself to a standstill, he was a most deserving Man of the Match.

This was the Wanderers' final match of the season and sixth place is the highest they have achieved in recent years. The 2s lost against Dover and remain in fourth place in their league whilst the 3s are champions of London 2 (SE) Rural. Wanderers Veterans will play their Spitfire Gold Veterans Plate Final against Old Gravesendians next Sunday 10th April on Maidstone RFC ground. Kick-Off is at 2.15 PM