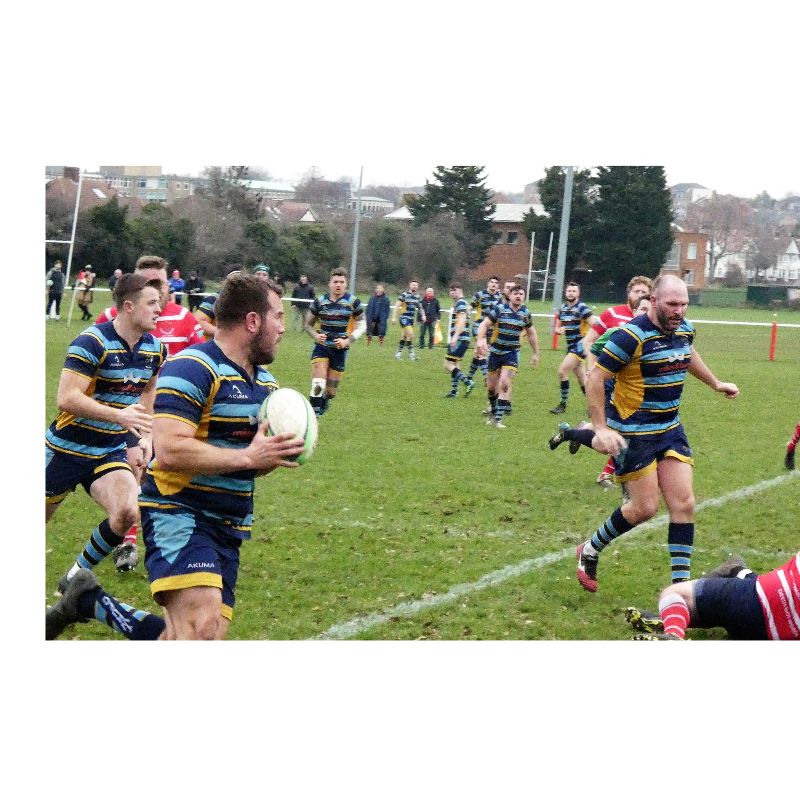 Wanderers overcome a red card and injuries to record a bonus point victory on the road.

Wanderers and Charlton Park last met on ‘Colin Brown’ day when Park won 15-10 and were one ahead of Thanet in the league in sixth place prior to this match. A close match was in prospect.

There were six changes to Thanet’s starting XV. Tighthead James Green and second row Connor Brown returned to a strong looking pack. Tom Walton started at scrum half and Harry Carter, Ryan Copp and John Oxley were in the backs where Charlie Knight was again sidelined through injury.

Wanderers kicked off with the advantage of a slight slope and had the edge in early exchanges. Jack Startin gained many metres with a powerful break and Marius Thompson made a big clearance to Park’s 10 metre line. On twelve minutes Walton received ten metres inside his own half and set off on one of his mazy runs, weaving through home defenders to touch down under the posts. Thompson added the extras but the lead was cut five minutes later when Park converted a penalty for 3-7. Half way through the first half the referee made a critical intervention in the game when he showed a red card to Wanderers’ left wing Louis Marshall. The incident will be fully aired at the appropriate hearing when the card could be rescinded. In the remaining three-quarters of the match, Wanderers had to reshuffle their team of fourteen. Ten minutes later a penalty took Thanet deep into the Park half and after the resulting line-out, Thompson’s beautifully judged cross kick into Ryan Copp’s arms gave the winger a good, welcome back try after months of absence due to work commitments. The conversion attempt fell just short so Wanderers led 3-12. Back came Park with a second penalty to make it 6-12. In the closing minutes of the first half both Thompson and Startin sustained injuries that ended their participation in the match and caused a further reshuffle of the Wanderers ranks. Callum Doody went on for Thompson and Lennie Brown replaced Startin in the second row with skipper Sam Taylor moving from the back-row to outside centre in the reshaped backline.

In the first twelve minutes of the second half Park drew level at 12-12 through two penalties from their kicker Joe Simpson who was on top form. As they pushed for the lead from their scrum close to the Thanet line, Park’s scrum was demolished as it was driven back by an exceptionally powerful scrum from the Thanet pack that saved the immediate danger and re-energised the whole team for the remainder of the half. Thanet tighthead replacement, Gully Goodall had left the bench just before this scrum and played a crucial part in its success. He had travelled from Exeter University to play an important 25 minutes in Wanderers’ win. A minute later a penalty set an attacking line-out close to the hosts’ line but the line-out was adjudged to be not straight. Wanderers were not to be denied and a penalty for a high tackle set a line-out 15 metres from the home line. The line-out drive was augmented by some of the three-quarters and it was team captain Sam Taylor who claimed the try to regain the lead at 12-17 as the conversion attempt failed.

Wanderers pushed for the fourth try but both sides were frustrated by the continuing proliferation of penalties. Harry Carter was now limping badly and had to be withdrawn. The clock was ticking as Wanderers found touch in a good attacking position from another penalty. The drive was advancing on the home line when the ball squirted out of the back of the scrum and Walton was alert to race over for his double and the bonus point try. The scrum half then thumped over the conversion to make, what proved to be the final score, 12-24.

Speaking after the match, Thanet Head Coach, Mike Pond, commented, “To travel away to Charlton Park, be reduced to 14 men after 20 minutes and suffer three bad injuries and still come away with a bonus point win shows how far the squad has come this season. Everyone pulled together, dug deep and ground out our first win at Kidbrooke for many years. Was immensely proud of every one of them”.

Any of today’s side could have been the man of the match but Thanet’s young versatile prop, Harry Clemo, was the coaches’ choice after a terrific performance, in both the front and second rows where his power was a critical factor.

Next Saturday 29th January, Folkestone, who are currently in bottom place in London League 2, are the visitors to St Peters. (Kick Off 2PM).