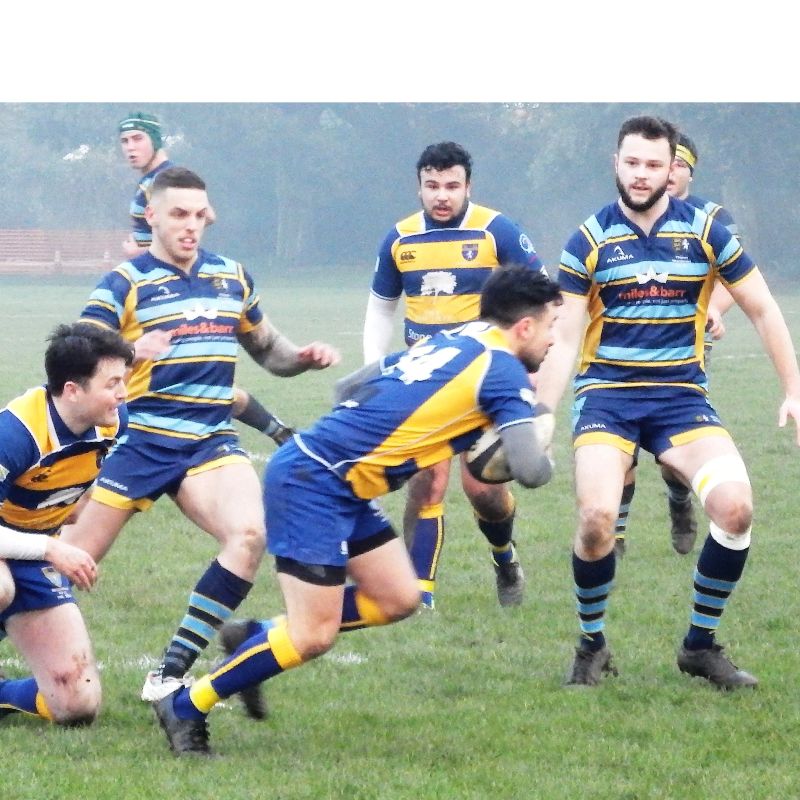 No points for Wanderers on a testing afternoon against strong opposition.

Wanderers welcomed back Charlie Knight on the wing and Jack Startin in the second row after two months absence. Scrum-Half Callum Doody started, with Tom Walton on the bench and Sam Rolfe retained the full-back shirt after a good performance at Gravesend. James Green took a break from the front row with young prop, Gully Goodall in at tighthead.

Wanderers kicked off down the slope, as the mist replaced the sunshine that had shone on the Under Tens sides from Beckenham and Thanet who had provided an entertaining curtain-raiser to the seniors’ fixture.

Wanderers started well and after seven minutes Marius Thompson converted the second of two penalties from 23 metres. Rolfe made two good clearances before Beckenham’s 8 and Captain, Andy Knowles, picked a good line through Wanderer’s defence and touched down under the posts for a 3-7 lead. A penalty to the visitors soon put them back in Wanderers’ red zone before a line-out steal by Wanderers’ No 8 James Hamilton allowed the danger to be cleared. A kicking duel ended in a marginal gain for Wanderers. On 20 minutes a Beckenham drive took them dangerously close to the home line before a timely turnover gave Thompson the chance to clear well to halfway. On 30 minutes Beckenham’s sharp handling was rewarded with a try wide right which was well converted for a 3-14 lead. Wanderers strayed offside minutes later and Louis Richard’s boot made it 3-17 to Beckenham. Thanet raised their game in the remaining minutes of the half and a penalty set the line-out close to Beckenham’s line. The resulting drive was pulled down and today’s referee, Paul Shepherd, did not hesitate to award a penalty try and show a yellow card before blowing the half-time whistle.

Thanet remained on the attack in the opening minutes of the second period and forced a knock-on. A man down, Beckenham had left a gap on the blindside at the scrum and Charlie Knight powered through. A penalty to the corner put pressure on the visitors’ line before Wanderers were slow to release and Beckenham cleared their lines from the penalty. Hamilton stole another line-out and. play in the first ten minutes of the second half was deep in the visitor’s half. Thanet’s head coach, Mike Pond, now emptied Thanet’s bench with Danny Clement on for Goodall, David Lemon for Andy Letts and Tom Walton replaced Doody. Wanderers offended between their ten-metre line and the halfway line and Beckenham’s marksman Richards, again made no mistake for 10-20.

Walton made an elusive break before handing on to Knight who marked his return with a trademark try as he brushed aside a couple of tackles before touching down. Thompson’s conversion narrowed the gap to three points at 17-20. Thanet failed to deal with the restart and Beckenham quickly surged forward to restore their lead at 17-27. Walton and Knight again combined well to threaten Beckenham’s line but fell just short. Both teams went all out in the closing ten minutes of the match but it was Beckenham who notched up their fourth try to win 17-34 and secure the try bonus point that keeps them in third place in the league, just three points behind new leaders, Colfeians.

Wanderers will feel the score does not reflect the match fully but there was a lot of quality in the opposition’s squad who were clinical in their finishing. Wanderers’ James Hamilton was once again Thanet’s man of the match after a fine display of Number 8 play where he barely put a foot wrong in a demanding contest.

Next Saturday (22nd January) Wanderers travel to take on another of South London’s top sides, Charlton Park, who have the same league points as Thanet but replace them in 6th place by virtue of a better points difference. A close contest is in prospect.