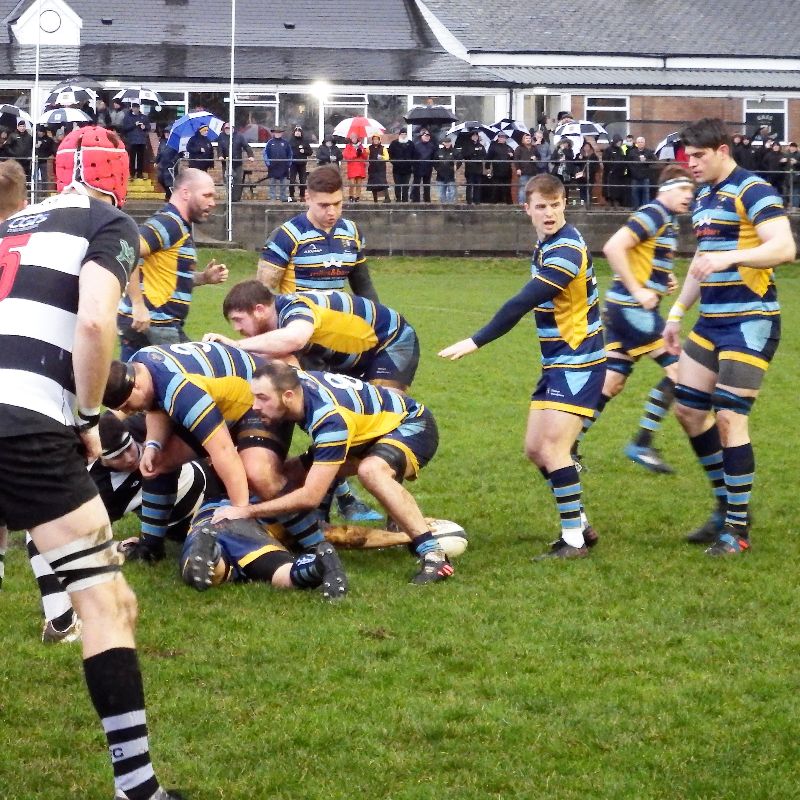 Wanderers are just edged out in a close contest with the league leaders.

There was just one change to Thanet’s squad from that which closed 2021 with a win against Deal. Full back John Oxley was a late withdrawal, giving a season’s debut to Sam Rolfe at full back. He became the fortieth player to represent the first XV this season.

Stormy conditions with heavy rain have become the customary weather for fixtures between these two clubs and today was no exception.

Thanet made a lively start and Marius Thompson converted the second of two penalties for an early 0-3 lead. This was soon wiped out as the restart was dropped setting good field position for the hosts. A penalty took them close to Wanderers line before a strong line-out drive powered Gravesend over for an unconverted try. 5-3. Four minutes later Gravesend were penalised for holding on and Thompson’s boot made it 6-5 to Wanderers. Penalties were accumulating against both teams as the battle warmed up. After a warning to Thanet’s captain, Sam Taylor, for too many ruck penalties, another infringement then cost the skipper ten minutes on the sidelines. Great defence from Wanderers kept their line intact during his absence although a ‘pushover try’ was disallowed by today’s top-notch referee Joseph Kendrick-Eriksen who had travelled from Norfolk to officiate. Thompson had taken a couple of knocks and had to withdraw to be replaced by Callum Doody. Wanderers went close when a pass, close to the line, was forward and another promising break was halted when a lofted pass was not to hand and sailed into touch. Taylor returned two minutes before the break when the score remained at 6-5 to Wanderers.

Early in the second half Wanderers were penalised for a high tackle that brought Gravesend into Thanet’s danger zone. With the pack augmented by some of their backs they powered through for a second try that was again unconverted for the 10-6 lead. David Lemon was replaced by Andy Letts after 10 minutes of the half. Connor Brown was increasingly influential for Wanderers driving hard into the Gravesend defence and 18 minutes into the half his speed carried Wanderers deep in their opponents half. A sustained assault on the home line and some inspired handling finally overcame Gravesend’s obdurate defence for Taylor to touch down under the posts. Doody converted to give Thanet the lead again at 13-10. Injuries to Brown and tight-head Harry Clemo meant they had to retire from the fray with Danny Clement on and Lemon returning. Wanderers looked comfortably in control before a Gravesend breakout led to an unconverted try and a 15-13 lead. The momentum was now very much with Gravesend and only some superlative defending from Wanderers prevented the league leaders from adding a try bonus point in the closing minutes,

This was an excellent performance from Wanderers against the side who have occupied top spot for most of the first half of the season. Gravesend have a powerful pack and used it well in suitable conditions and both teams’ defences had a fine afternoon. Despite the conditions this was an enjoyable game to watch. Thanet supporters will be happy with the level of their performance in a game that, like the home match in early October, could have gone either way.

Next week Wanderers will entertain Beckenham who are currently in third place. The reverse fixture was lost 51-28 after Thanet had led 21-10 at half time so an interesting contest is in prospect.

All support is welcome, the ‘Extra Man’ on the balcony could be crucial.