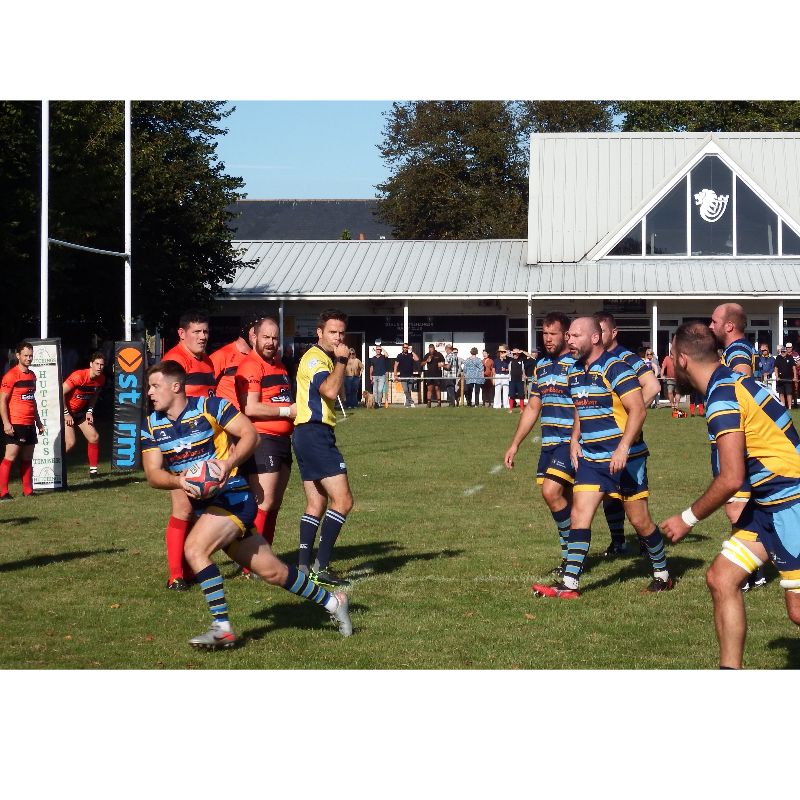 There were seven changes to Wanderers XV from that which started last week against Colfes. Alex Tuddenham made his first-team debut at tighthead and there was a start for Jack Startin who debuted from the bench last week. He joined second row Adam Gaddes, who was starting for the first time this campaign as were Cam Pond and Charlie Knight in the centre. Debutant Ollie Greene-Taylor replaced the injured Antony Theodosiou on the wing and Marius Thompson was back from a Norway training camp at full-back. An injury sustained last week kept open-side, Sam Taylor, on the sideline, where he is likely to remain for the next 4-6 weeks. Charlie Knight took over as Captain. Unbroken sunshine and another unyielding pitch meant conditions were again testing for the players.

An early clash of heads, between two Deal players, led to a lengthy break in play. When play resumed, Marius Thompson and Nick Herbert combined well and a penalty for offside saw Thompson open Wanderers account from 20 metres for a 0-3 lead. Two minutes later Knight and winger Henry Mirams’ break opened up the home defence for Mirams to touch down for an unconverted try. A succession of penalties close to the home line put pressure on their defence before there was a debut try from Tuddenham who powered over. Thompson added the extras for a 0-15 lead for Thanet with 20 minutes played. The home side regrouped and as Wanderers’ penalty count mounted in the run-up to halftime, tackles were missed and Deal touched down for an unconverted try. In the remaining three minutes of the half, the home scrum-half nipped around the blind-side of a scrum for a second try that was converted for a halftime score of 12-15.

Wanderers had the advantage of the slope for the second half with possession even for the opening ten minutes. Thompson was now shown a yellow card and three minutes later Deal levelled the scores with a penalty and shortly after Thanet offended at a line out and the home outside-half converted well for an 18-15 home lead. Wanderers quickly regained the lead as sharp handling along the backline reached Knight, at outside centre, who shrugged off a couple of tackles to score and Herbert’s conversion made it 18-22. Minutes later, Herbert added another three points to Thanet’s total from eighteen metres out before Deal’s open side was shown yellow. Another Wanderers penalty made the score 18-28 before Deal again went down to fourteen men as their tighthead prop was shown yellow. All of Thanet’s substitutes were now in action including a confident debut from Dan Howard in the back row. Wanderers sent a penalty near the corner and a big drive for the line was augmented by full-back Thompson who claimed the touchdown that brought the try bonus point and an 18-33 lead. Deal continued to press and in the final minutes notched another try to make the final score 23-33.

This was a battling team performance from Wanderers to claim a rare bonus-point win at Deal and Bettshanger. The blend of youth and experience in the squad fully deserved their hard-earned victory although coaches will remind the team of the need to maintain concentration and intensity for the full eighty minutes. It’s a big step up from junior to senior rugby but Jack Startin has crossed that bridge well and gave a mature performance today that brought him the Wanderers’ Man of the Match accolade.

Next Saturday Wanderers will be at home to Gravesend who have started their league programme with two wins. Please support, kick off is at 3 PM.