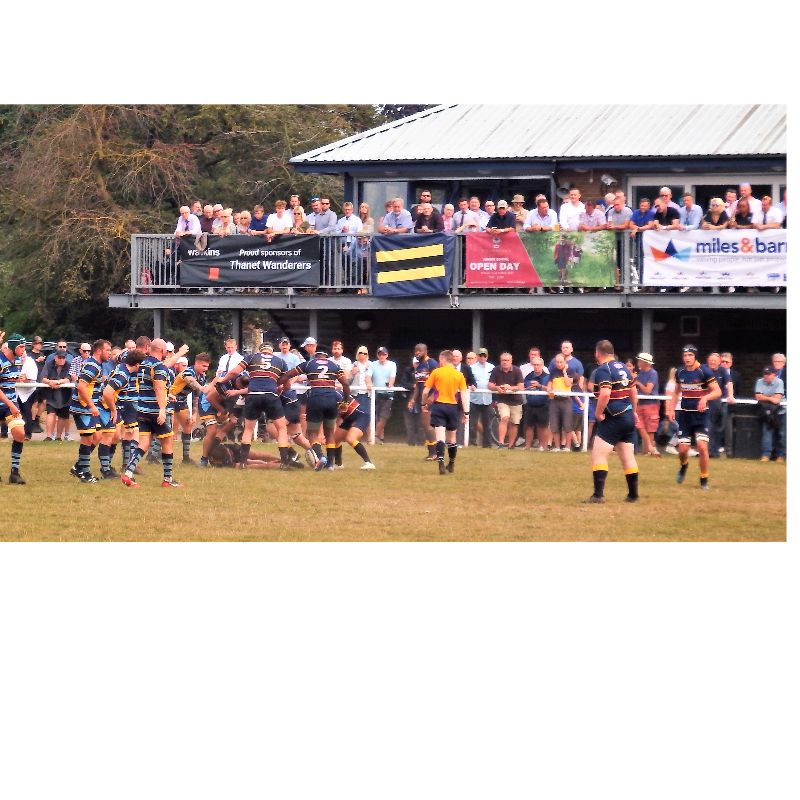 Old Colfeians were the final league visitors to Thanet Wanderers before the lockdown of February 2020. The rain and mud of that February afternoon were replaced by a bone-hard pitch and a warm September afternoon for the first fixture of the 2021/22 season. There was a good crowd at St Peters Rec, augmented by the many who had attended the Paul Keohane Sports Fund Charity Lunch in the Clubhouse.

Colfe’s big pack quickly made their presence felt and secured a penalty that was stroked over from forty metres, into the breeze, by their Full Back Jack Potter. Andy Letts, in the second row today, effected a turnover but the subsequent penalty failed to make touch. Thanet’s ten, Nick Herbert’s big tackle on a powerful Colfe’s forward halted the opposition momentum before another Wanderers’ penalty again didn’t reach touch. On seventeen minutes a sickening head on head collision between Wanderers blind side forward, Warren Riddell-Broomfield and winger Louis Marshall led to a lengthy break in play as both were treated before moving to the touchline for head injury assessments. Their replacements Jack Startin, in the pack, and Harrison Leach on the left-wing, on their senior league debuts, both played with courage in the face of powerful opposition. Colfe’s big pack quickly rumbled over when the game resumed for a 0-10 lead. After a Thanet movement broke down, a loose Colfe’s pass was grabbed by Antony Theodosiou who raced to the line to record Wanderers’ first try of the new campaign. Tom Walton converted well to make it 7-10. A Colfe’s try was disallowed for a forward pass and Thanet’s hooker Neil Wakefield was shown yellow after a slap down to be replaced by Danny Clement. Forward power brought Colfe’s another try before Thanet’s scrum-half, Tom Walton, spotted a little gap and nipped through for a try which he converted to bring the score back to 14-15. On the stroke of halftime, Colfe’s scored a third try to lead 14-22 at the break.

The visitors were immediately on the attack after the break and an early penalty attempt rebounded to safety off the crossbar before good Thanet defence cleared the danger. Thanet’s centre pairing of Cameron Beck and James Crompton were also making excellent senior debuts after moving from the Colts’ ranks where their skills had been honed by Ian Lodge and his team. Sadly Cameron had to withdraw with a hamstring problem. Warren R. Broomfield had returned to the back row patched up after his blood injury and Clement found himself in the centre where his big tackle halted a growing Colfe’s threat. Wanderers spirit never flagged throughout the match and twenty minutes into the second half, James Green on his return to Wanderers duty, emerged from the bottom of a pile of bodies having scored Thanet’s third try. No conversion but at 19-22, the game was in the balance. It was the visitors who grabbed the advantage and in a twelve-minute spell scored three tries and a penalty to lead 19-42 and leave Wanderers battling for a try bonus point. In an exciting close to the game, Thanet battered away at the visitors’ line but errors crept in and cost them dear.

Colfe’s went down to fourteen players after a yellow card for repeated infringements but try as they might Thanet could not secure the fourth try.

Most of the game was closely contested and Wanderers will be happy with their overall performance against a side who have been one of the league’s high flyers recently. The pack put in a terrific shift today with debutants Jack Startin and James Hamilton showing well. Captain Sam Taylor led by a very fine example and was deservedly the Coaches’ choice as man of the match.

Next Saturday, 25th September Wanderers travel to Deal and Betteshanger, who won away at Crowborough to open their season Another tough match is in prospect so please support the team in this local derby, kick-off is at 3 PM.