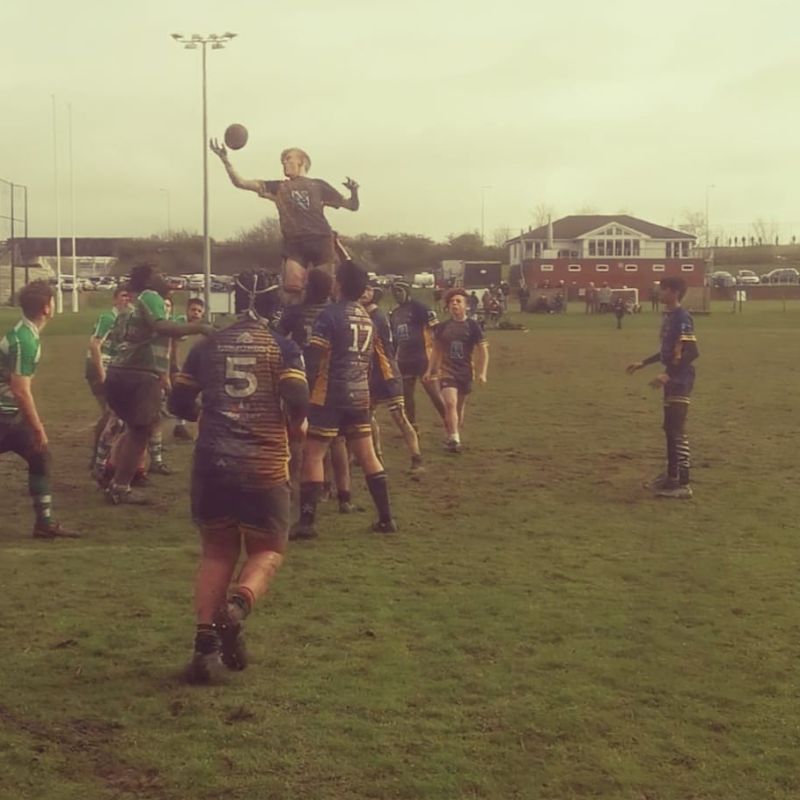 Thanet Under 15s travelled to Folkestone RFU for the semi final of the Kent Goblet on Sunday, hoping to overturn the recent 27-17 loss at the same venue 3 weeks ago!

Missing several key players due to injury, the coaches highlighted the need for all players to up their game by 20% and to work hard for each other.

Without a neutral referee the teams agreed to ref a half each in the aim of fairness.

Playing on a pitch that was very wet and boggy under foot, the game started with a flurry of dropped balls and knock on’s as expected. Both teams defending well and cancelling out each other’s attack. Thanet work hard in defence and Wednesday’s training in nullifying the large Folkestone No 8 worked well with him being knocked back over the gain line on several occasions, the Thanet backrow of Flynn S (Captain for the day), Sam M and Oz W all stepped up with some relentless tackles. The Thanet backline worked hard in defence closing down the opposition space very quickly forcing lots of knock on unfortunately they were not able to capitalise on the mistakes with quite often the last Thanet pass going to floor. Patrick S and Tische L tackling well in the Centres.

The deadlock was broken after 16 mins when full back Josh P managed to step outside the opposition winger and win the race to the line, unfortunately Harrison Q was unable to make the conversion. Thanet 0-5 up. The game continued in similar fashion with both sides cancelling out each other’s attack forcing several dropped balls.

With halftime approaching Folkestone pressed hard and after a ball was kicked dead behind the Thanet dead ball line Folkestone managed to breach the resolute Thanet Defence after the 3rd pick and go from the resulting scrum. The kick closer to the posts was made by the Folkestone 9 and meant the led 7 to 5 at half time.  A regrouping at half time and a stern team talk led to a positive team set ready for the second half.

The second half started very much the same as 2 x evenly sided teams tested each other’s defence before after 6 mins full back Josh P made a rare kick from outside the Thanet 22, chasing his own kick he managed to recover the ball just inside the Thanet Half before out pacing 3 of the Folkstone chasing defenders in a sprint to the line scoring under the post, making for an easy conversion for Harrison. Thanet now led 12 to 7.

A number of Thanet penalties meant that after 18 mins Folkestone managed to score their 2nd try from a pick a go from a line out the scores now tied 12 all with 12 mins to go, nervous times for the coaches and parents ahead. Both sides starting to tire from the heavy underfoot conditions and several injuries to the Thanet side which meant the finishers were used to the full.

Folkestone started giving away some penalties of their own for creeping regularly over the offside line. Harrison Punishing them with a long-range kick into the corner. The lineout resulted in several pick and go’s by the Thanet Forwards including Johnny R and Charlie being knocked back close to the line before winger Josh OD managed to get involved in ensuing ruck and crash over from 2m out, the try being awarded despite opposition claims to having hands under the ball! Thanet led 12 to 17 with 7 mins to go.

Thanet continued with their outstanding defence Winger Ben B having to come off with a dead leg after one tackle and Dennis D already off sporting a nice shiner from one earlier huge collision.

Thanet managed to hold on with Harrison Q kicking the ball out on the last play of the game from a Thanet line out to secure the 12 to 17 win and overturn the previous results and secure only our second win since January. The players finally putting into practice what we have trained for the past few weeks / months. The parents and coaches delighted to see the boys back performing how we knew they could!

The whole team played their part with some awesome tackling and some great running rugby. It was decided by both Head Coaches that all the boys decided the Player of the Week as everyone played their part in a very enjoyable game to watch. Thanet will now meet Gravesend or Sevenoaks B in the final of the Goblet on the 5th April at Ashford, Covid-19 virus permitting!!