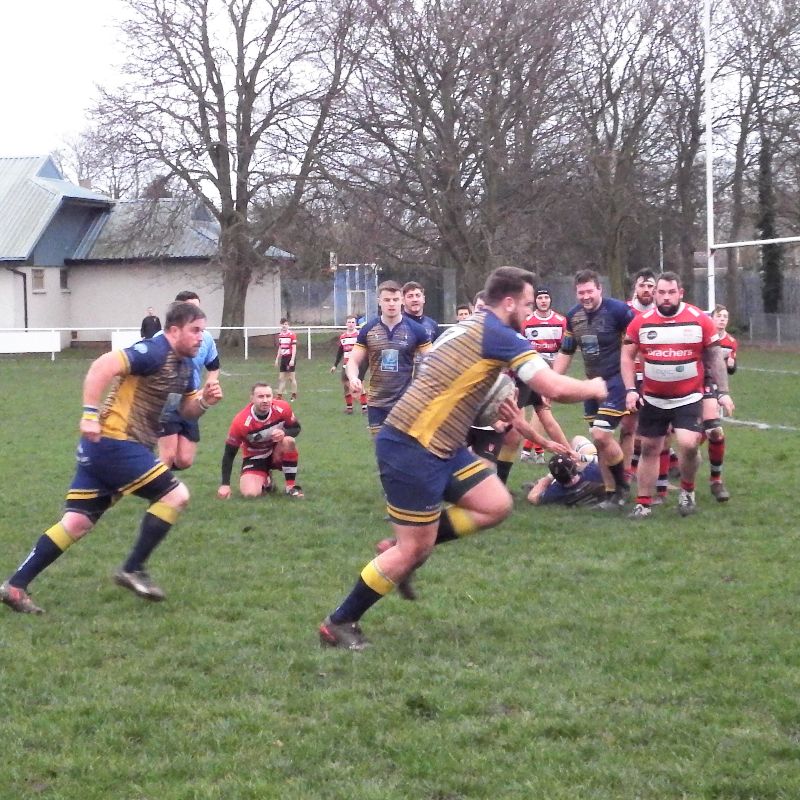 Thanet Wanderers RUFC 43 – 8 Maidstone RFC
An outstanding all round performance earns Wanderers a welcome bonus point win.
Adam Gaddes, Reece Hougham and Marius Thompson, from Wanderers long term injury list, returned to the starting XV with Charlie Knight and Sam Taylor also starting after missing the last game before Christmas.
A good sprinkling of Maidstone supporters joined the rather sparse early home support for the match between the two clubs in the league relegation zone.
From the second of two early penalties Tom Walton quickly raced away before handing on to Gaddes to score on just his fifth start of the season.  Nick Herbert’s conversion gave Thanet the ideal start,  7-0 ahead after just four minutes. The visitors knocked over a penalty three minutes later from in front of the posts but on ten minutes Walton again broke before passing to Thompson who celebrated his return with a try that was well converted by Herbert for a 14-3 lead. The visitors dropped a golden opportunity near to the home line and from the resultant scrum Herbert used the strong wind to clear to the Maidstone 22. A good charge down by Sam Taylor maintained the pressure and Thompson now turned into provider with a scorching break before releasing winger Antony Theodosiou to touch down his maiden first XV try after twenty five minutes. Four minutes later a good Herbert penalty set the line-out just ten metres from the visitors’ line and when the Maidstone defence halted the surge to the line illegally, a penalty try was signalled for a bonus point fourth try and a 26-3 lead. Walton used the wind to good advantage with a massive clearance that stopped in the visitors’ in goal area. A lovely combination between Warren Riddell-Broomfield and Reece Hougham before a switch inside to Herbert in support gave the fly-half a well deserved try which he duly converted. Much of Wanderers handling in the first half was of the highest standard and the final score just before half time maintained this. The ball flashed across the line to Theosidou who was hauled down just short with Captain Neil Wakefield on hand to complete another excellent try and close the half with Thanet 38-3 ahead.

George Orton left the bench in the second half to join Andy Letts in the second row with Gaddes moving to the back row replacing Riddell-Bloomfield. Wanderers continued to enjoy the majority of possession during the first fifteen minutes of the second period although the wind now favoured the visitors. The seventh try followed a scrum 25 metres out with a patient build on the right flank before the ball was spun left and Hougham burst clear to touch down in his first game since mid October. Maidstone now mounted a series of attacks and at two minute intervals Wanderers lost 3 players to yellow cards following a run of infringements. Letts was first to see yellow followed by Theodosiou and finally Danny Clement was given his marching orders as Wanderers battled to avoid conceding. Chris Hood replaced him at loose-head at the next scrum. As Thanet approached full strength again Brett Scott, who had been his usual commanding presence in the defence of the line, became the fourth Wanderer to go into referee Ben McNamara‘s book. Ryan Copp got useful game time from the bench for his first appearance since late October. Maidstone’s efforts were rewarded with an unconverted try in the dying moments of the match for a final 43-8 score.
It was a true game of two halves with Wanderers dominant in the first half and producing some truly excellent flowing rugby. The centre pairing of Charlie Knight and Stuart Plumridge was the midfield heart of this and in the second half the pair were powerfully prominent in defence. Captain and hooker Wakefield led by example and marshalled the diminished side to produce a superb defensive shift. His two props Clement and Tighthead Luke Tolley, who again played the full eighty minutes, both put in valuable shifts against weighty opponents. With so many fine performances there were many candidates for the man of the match award, generously sponsored this week by Mr Bob Walton. However another marvellous display from his grandson Tom Walton earned him his second award from four starts.
The win lifts Wanderers out of the relegation zone into ninth place. Next week Wanderers travel to Crowborough who are in sixth position. (Kick off 2PM).
Squad: Clement, Wakefield (C.), Tolley, Gaddes, Letts, Riddell-Broomfield, Taylor, Scott, Walton, Herbert, Hougham, Plumridge, Knight, Theodosiou, Thompson. SUBS: Hood, Orton, Copp.