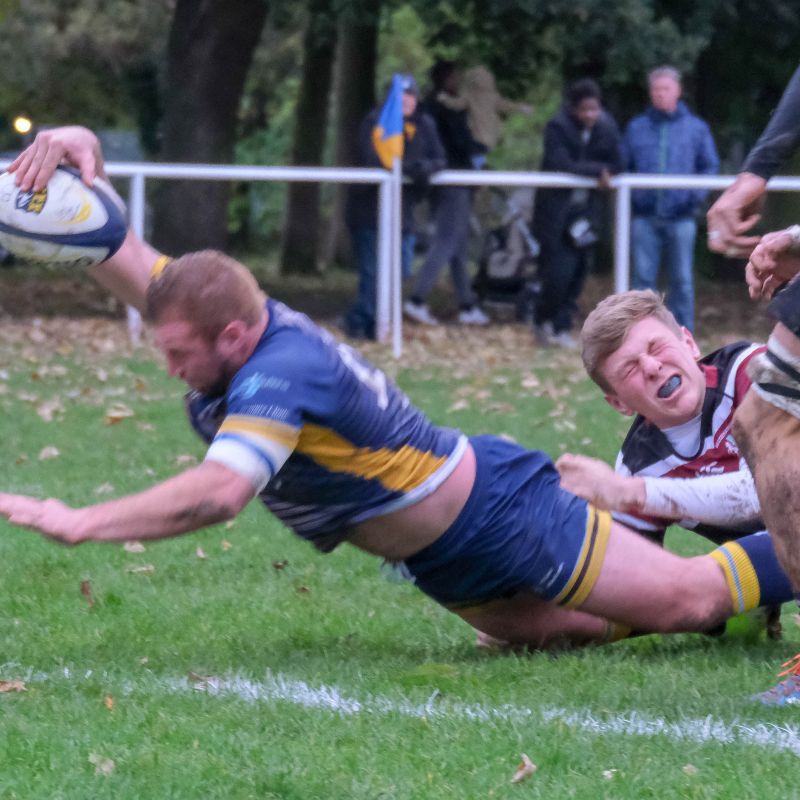 A good contest ends with a much needed win for the Wanderers.

Beccechamian had made a promising start to their league season with four wins including a notable win at Charlton Park. This season, in London League 2, is their first ever at this level following back to back promotions. Wanderers were happy to see Nick Herbert back at 10 and Charlie Knight return at outside centre to partner Cam Pond at inside centre. Regular kicker Sam Rolfe is likely to miss a few weeks after fracturing a thumb last week.

The visitors kicked off down the slope on a dull windless afternoon. Thanet started well and played most of the opening minutes in their opponents’ half.  The fourth of the penalties awarded to Wanderers in the first 15 minutes brought a yellow card for a visitor and gave Herbert the opportunity to open the scoring, 3-0.

Andy Letts caught the restart and broke well before another penalty to the home side resulted in a strong rolling maul from which the ball was spun right to winger Louis Marshall and there was no stopping him from that range. Herbert’s conversion attempt hit the post but Wanderers led 8-0. Both Marshall and James Robinson on the opposite wing looked sharp and eager to get their hands on the ball as Wanderers continued to press.

Twenty five minutes in Wanderers retained possession well with some nice inter passing between backs and forwards that finished with Tom Longdon going over for the second try, 13-0. The visiting team responded to coaches’ appeals to up their game with a concerted attack on Thanet’s line which was well defended and undermined by conceding penalties.

Work commitments have kept Kieran Wright out of the first XV for too long but the second row showed he had forgotten nothing with an athletic break and off-load. A big tackle from Wanderers captain Neil Wakefield and a try saver from Knight as he tracked across at speed kept the home line intact. With three minutes of the half remaining Herbert was shown yellow and Beccs upped the pressure to go over wide left. An excellent conversion sailed over to leave it at 13-7 at half time.

Thanet’s loose head prop Danny Clement took a break for the start of the second half after a half notable for big breaks and solid defence. Chris Hood took over at tight head as Luke Tolley moved to the other side of the front row. Three minutes into the half Thanet’s scrum collapsed but the resultant kickable penalty went wide.

Heartened by the reprieve, four minute later some brilliant handling from Wanderers, allowed Knight to power through Becc’s defence before handing on to Herbert who showed good strength to hold off defenders before scoring wide right.

No conversion but Thanet had stretched their lead to 18-7.  Penalties went over from each side to leave the score gap unchanged before a good mazy run by Becc’s 12 brought them a try and less than a one score deficit at 21-15. Brett Scott who had been terrific for Thanet was now showed yellow together with Becc’s No 18.

Wanderers were denied an apparently certain score as Herbert and Marshall combined well but the winger pulled up with a hamstring injury as he raced towards the line and spilled the ball forward making Wakefield’s subsequent touchdown invalid. Kris Finneran had replaced Wright in the engine room and it was great to see Peter Macaulay playing in a first XV shirt for the umteenth season. Stubborn defence continued to frustrate Wanderers as they went for the bonus point try but with around ten minutes remaining it came courtesy of Thanet’s captain Neil Wakefield who was at the heart of a powerful maul to claim the score.

Wanderers finally put the match to bed after a surging attack, with Sam Taylor and Warren Riddell-Broomfield prominent, again resolved into a rolling maul that was irresistible with Hood at its centre to touch down the final try. Longdon’s left footed conversion from wide right just crept over for a final score of 33-15.

This was a fine team performance from Wanderers that brought a precious five points. Scrum half Lewis Stone was at his spiky best today probing and tackling to great effect but the coaches’ choice as man of the match went to the orchestrator of a fine performance from the pack, Neil Wakefield who had a quality individual game and whose single minded determination to earn the win was truly inspirational.

Next Saturday the team has its longest away trip to take on Hove who were relegated last season from London 1 but currently sit third in this league.(kick off 2.30). The 2s and 3s have home matches scheduled against Vigo and Sittingbourne which also kick off at 2.30.

Thanks to TOM KEMP for the picture