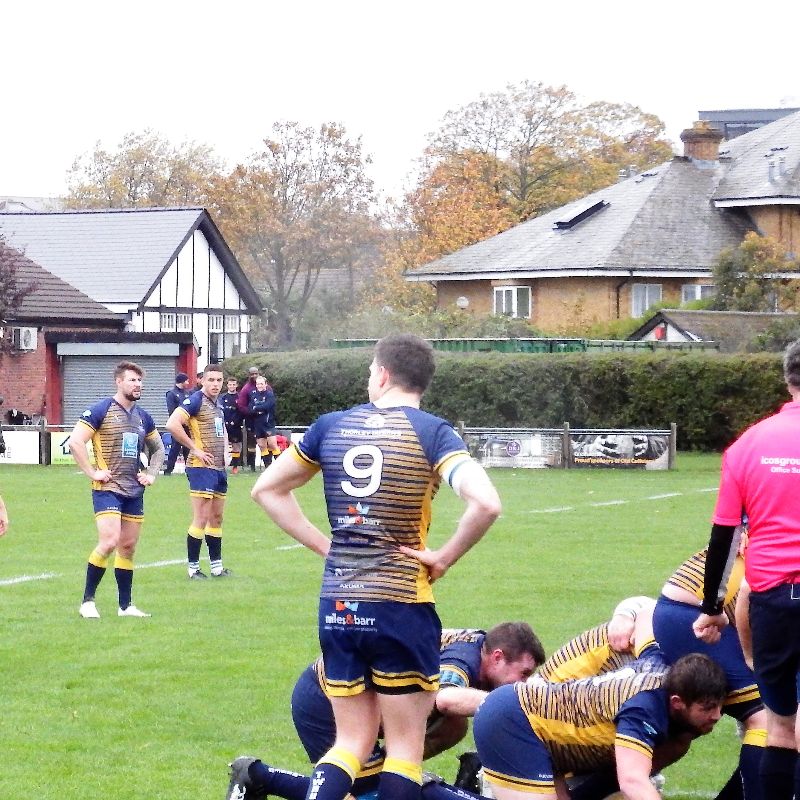 Luke Tolley and Jake Mcgee made rare starts in the Thanet pack and Kris Finneran, who is usually found somewhere in the back five of the pack, was on the right wing. Joe Carlier and Cam Pond were on the bench after a couple of seasons absence from the senior squad.

Steady rain fell throughout the match and a strong wind was behind Wanderers in the first half. Three early penalties were conceded as Thanet struggled to contain early pressure from the home side before outside half Tom Longdon used the wind well to clear into Colfes half. Conditions made handling difficult and there were plenty of errors from both sides. Full back Sam Rolfe also used his right boot well to gain useful field positions but Wanderers did not threaten the home line. Unusually with a quarter of the match played the referee decided that there was a clash between the teams shirt colours causing a change for the home side. Colfes decided to scrummage a penalty opportunity but this was strongly contested by Wanderers and the danger cleared. Loose Head prop Dan Clement sustained a head injury and was forced to retire to be replaced by Carlier. Number eight Andy Letts was shown yellow after being offside at a ruck and a minute later Ryan Copp was down injured and also forced to retire. Cam Pond who has had operations to both knees in recent years replaced him. Many injury breaks caused the first half to be extended by ten minutes and in the last of these the fourteen Wanderers finally conceded a try after heavy Colfes pressure to make it 7-0 at the break.

Brett Scott replaced Riddell- Broomfield in the back row for the second half and was soon in the thick of the defensive effort. Carlier carried forcefully before a sharp break by Lewis Stone made metres but the scrum half was penalised for holding on after a tackle. Letts now returned bringing Thanet back to fifteen players. A second converted try for the host club, after seven second half minutes, followed forward pressure and made the score 14-0. Five minutes later Carlier was injured and forced off. Three penalties against Thanet in quick succession brought a warning from the referee and as the home side again took a scrum from the third, enough Thanet defenders were sucked in to create an opening for a third try which was unconverted. Tolley was unable to continue in the front row causing uncontested scrums and reducing Wanderers to fourteen players again. The Thanet defence continued to frustrate the home team as they pushed for a fourth try and a bonus point with big tackles from Scott and Charlie Knight helping to keep the line intact until around seven minutes remained. The requirement for eight players to make up a scrum inevitably caused gaps in the Thanet defence and some good handling from Colfes led to an unconverted try wide left. Wanderers refused to give in and a quickly taken penalty initiated some smart handing. Knight made good metres before the pack battled over wide left with Scott touching down for a third try of the season from the back row forward. Rolfe made an excellent conversion, from near the touchline and into the wind, to make the final score 24-7.

Tom Longdon had another fine match in difficult conditions as did Adam Gaddes in the second row but the coaches choice as man of the match today was open side wing forward Sam Taylor. Now happily reinstated in the back row after a spell playing at wing three-quarter his speed and tough tackling was a linchpin in another quality defensive display for Wanderers.

The result and those elsewhere mean that Wanderers slip into the relegation zone with two wins after six matches played. The team is playing with excellent spirit and commitment but the limited pool of players available for first XV selection at the moment is proving a real headache for the selection panel. SQUAD: Clement, Wakefield (C.) Tolley, Mcgee, Gaddes, Riddell-Broomfield, Taylor, Letts, Stone, Longdon, Perry, Copp, Knight, Finneran, Rolfe Subs: Scott, Carlier, Pond.

There are no matches next Saturday due to the World Cup Final. The club will be open from 7.30 to enable breakfasts to be served prior to the 9.00am kick off. There was a great atmosphere for the semi-finals. Can England win the cup for a second time? The Vets open their campaign with an away game at Maidstone on Sunday Kick off 2.30.