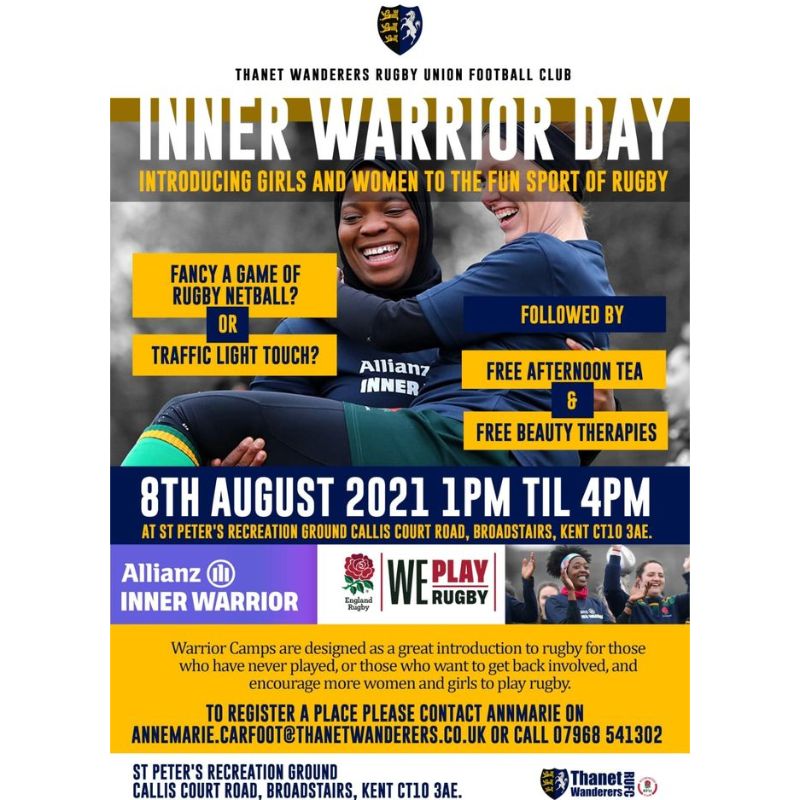 Former England Women’s captain KATY DALEY-MCLEAN says there’s no better time for women and girls to give rugby a go.

The Rugby World Cup winner is encouraging people to head down to Thanet Wanderers Club  on Sunday 8th August at 1pmfor a free Warrior Camp taster session to see if rugby’s for you.

The Red Roses made it three Six Nations Championship titles on the spin at Twickenham Stoop last weekend and Daley-Mclean hopes it can inspire women to get down to their local Warrior Camp.

Allianz Inner Warrior is a series of fun, social fitness camps for women all over the country and former England fly half Daley-Mclean, who racked up 116 caps and lifted the World Cup in 2014, believes the Red Roses’ success can provide a shot in the arm for the campaign to introduce women and girls to rugby.

The 35-year-old, who hung up her international boots this year, said: “It’s massive. When people talk about things they want to be involved in, it’s about it being successful – and I think the Red Roses lifting the Six Nations trophy again will be fantastic for Warrior Camps attendances.

“We’re starting to see so much more of the Red Roses on mainstream TV, with the Six Nations Final live on BBC 2. You want to jump on the back of that and for young people to want to emulate those girls.  Girls will go: ‘I can do that, and I’m going to have a go at that.’

“Allianz Inner Warrior is a fantastic campaign – not just for people who’ve played rugby but for a new person who might have an interest for the game.

“It’s the benefits of rugby all rolled into one – the option to meet new people, go out and socialise and be active. For me, they’re all the things I’ve loved about being part of the game.

“They’re a great opportunity to run around, get fit, play a different game and discover the social side of rugby – as well as all its physical benefits.”

As lockdown restrictions are lifted, Warrior Camps provide the perfect way to get active and boost endorphins after being cooped up at home for months.

The relaxed environment and clear emphasis on having fun with your teammates makes Warrior Camps truly unique, providing a fun and safe environment for women to learn different skills and take on a new challenge.

Over 150 local rugby clubs around the country – a record – have signed up to host a Warrior Camp in May, including Thanet Wanderers

Even if – like Daley-Mclean – you’ve hung up your boots, Warrior Camps are a great way to ease yourself back into the sport, make new friends and experience rugby’s distinctive range of benefits.

Daley-Mclean, who still stars for Sale Sharks in the Allianz Premier 15s, says the programme is a gamechanger and Warrior Camps around the country can be a breeding ground for new talent.

“In the future, this is where you’ll find the talent and next stars of the game – in camps like this, where people start going down with their friends and picking up an appetite for rugby,” she added.